Over the years, SBS Transit has won many national awards that recognise our service excellence, commitment in staff training and development. They are:
COMPANY AWARDS 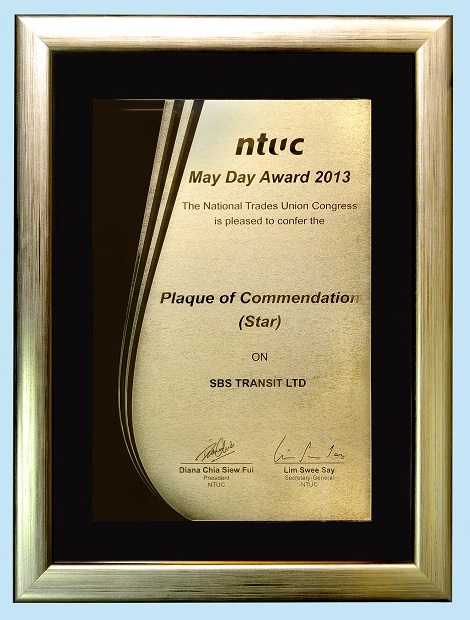 National Trades Union Congress May Day Awards
SBS Transit was conferred the Plaque of Commendation (Star) Award by National Trades Union Congress (NTUC) in 2013. The award is the highest award conferred by NTUC to companies to recognise consistent, outstanding and significant contributions towards good Labour-Management Relations, workers’ welfare and NTUC initiatives. We are the only public transport operator to be accorded this award by NTUC. 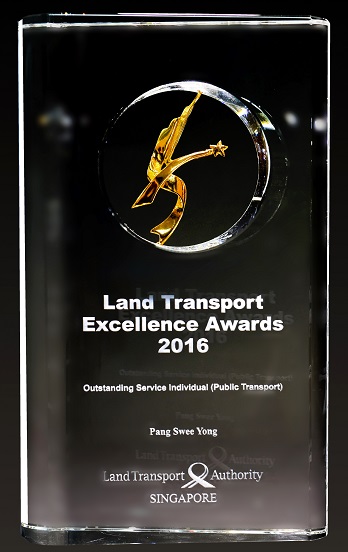 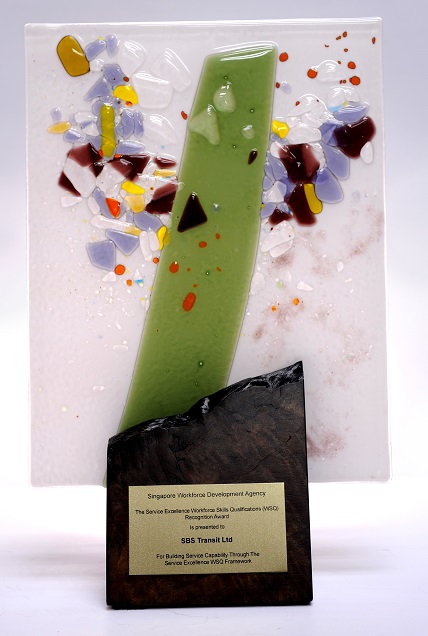 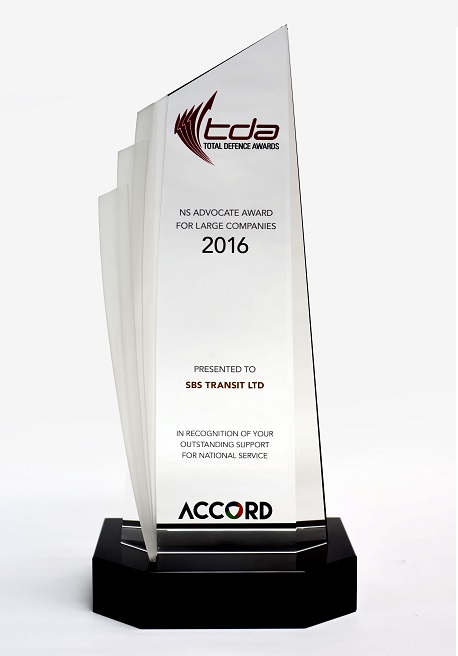 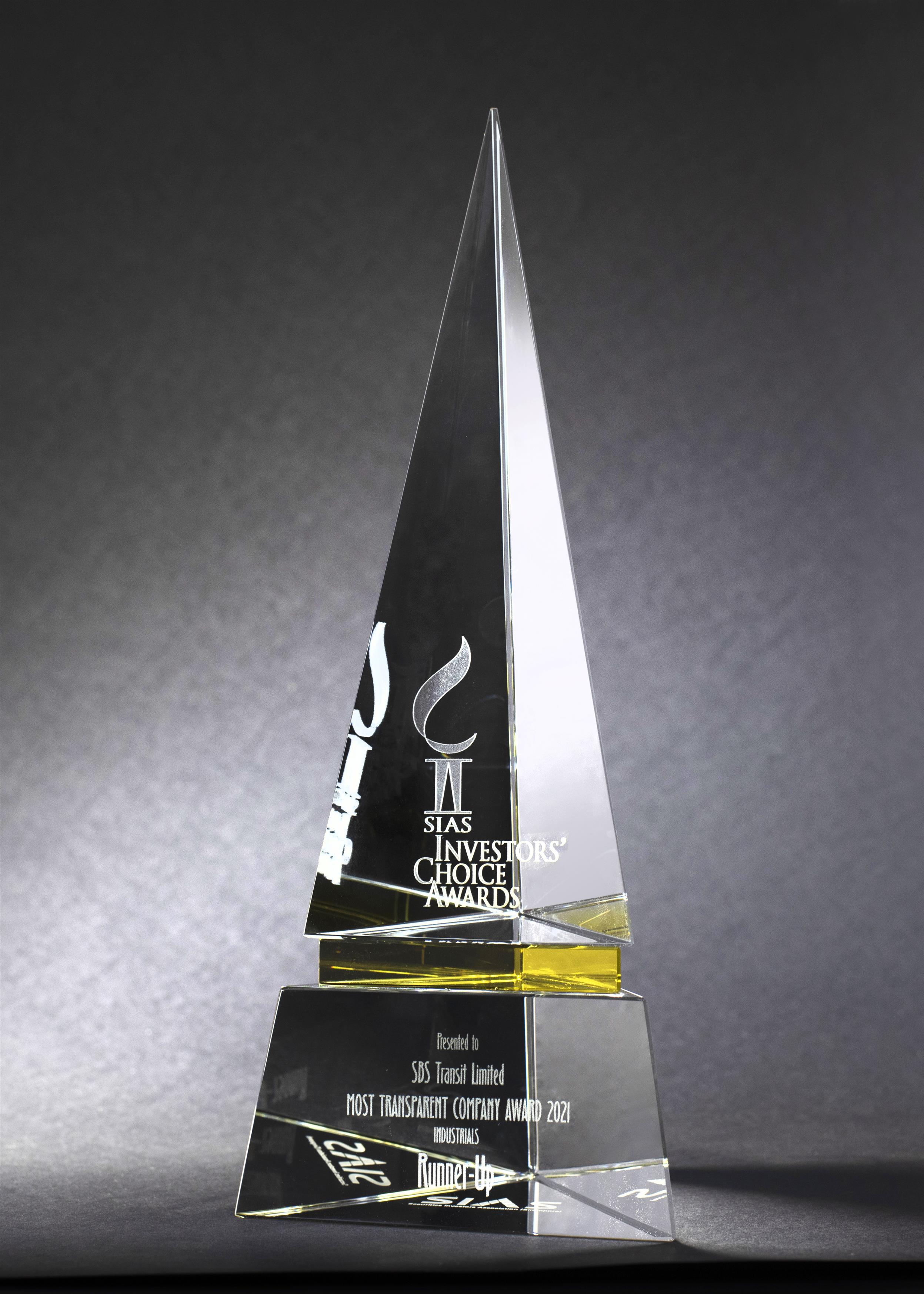 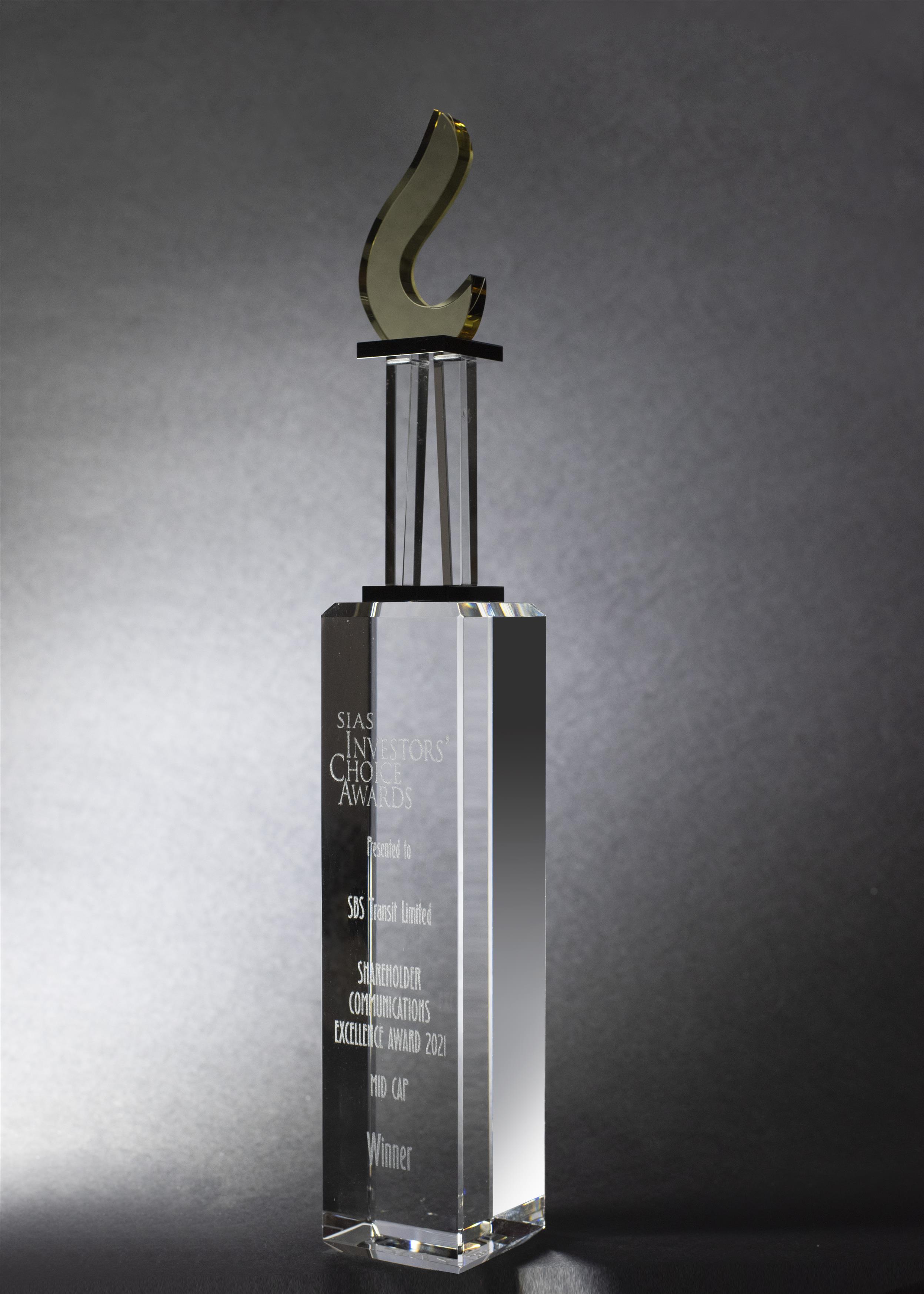 Securities Investors Association (Singapore) (SIAS) Investors’ Choice Awards
SBS Transit was awarded Runner-up for the "Singapore Corporate Governance Award" in the Mid-Cap category for good corporate governance from 2012 to 2014 at the Securities Investors Association (Singapore) (SIAS) Investors’ Choice Awards. SBS Transit was awarded a “Most Transparent Company Award” from 2017 to 2019. In 2021, SBS Transit was awarded with the "Shareholder Communications Excellence Award" (Mid-Cap) as well as Runner-up for the "Most Transparent Company Award" (Industrials).
Singapore Governance and Transparency Index
In 2022, we were placed at the 17th position against a field of 489 companies. Our score of 102 points is well above the national average of 70.6.
ASEAN Corporate Governance Scorecard
In 2018, we were placed 29th among the 100 largest Singapore listed companies.
ASEAN Energy Awards 2021
In 2021, Ulu Pandan Bus Depot was recognised as the winner of the Zero Energy Building (ZEB) category at the ASEAN Energy Awards 2021.
Human Resource Excellence Awards
We were conferred the Human Resource Excellence Award for effectively managing diversity across the Company and we were presented with the Silver Award in the ”Multi-generational Workforce Management” category in 2018. We were also the Gold Winner of the "Excellence in Retention Strategy" category at the Human Resource Excellence Awards 2021.
Singapore Corporate Awards 2021 (Special Edition)
SBS Transit was awarded with the "Corporate Excellence and Resilience Award" (mid-cap) at the Singapore Corporate Awards 2021 (Special Edition). This prestigious award is a strong affirmation of our commitment to strong corporate governance despite challenging circumstances.
EMPLOYEE AWARDS 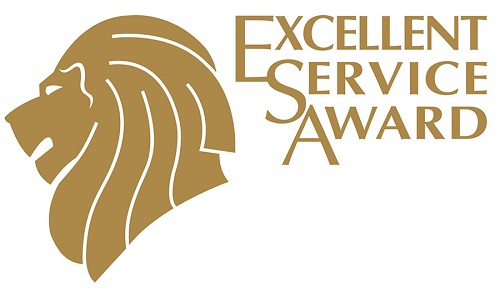 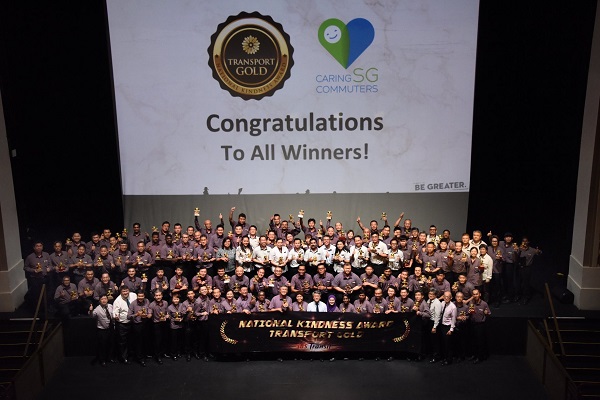 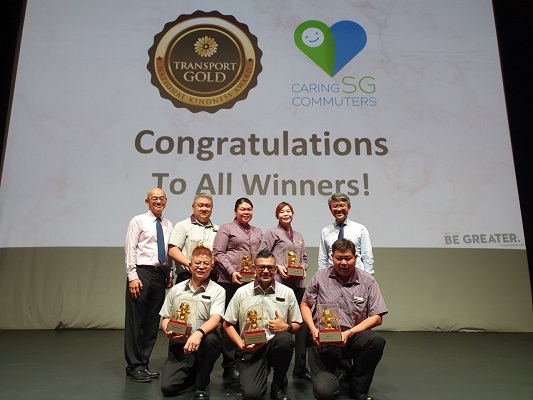 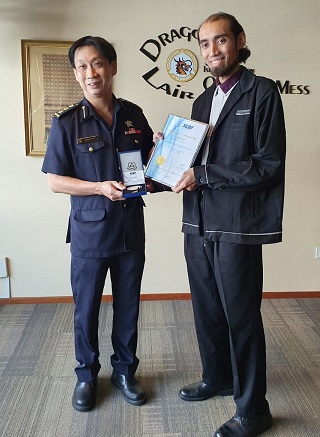 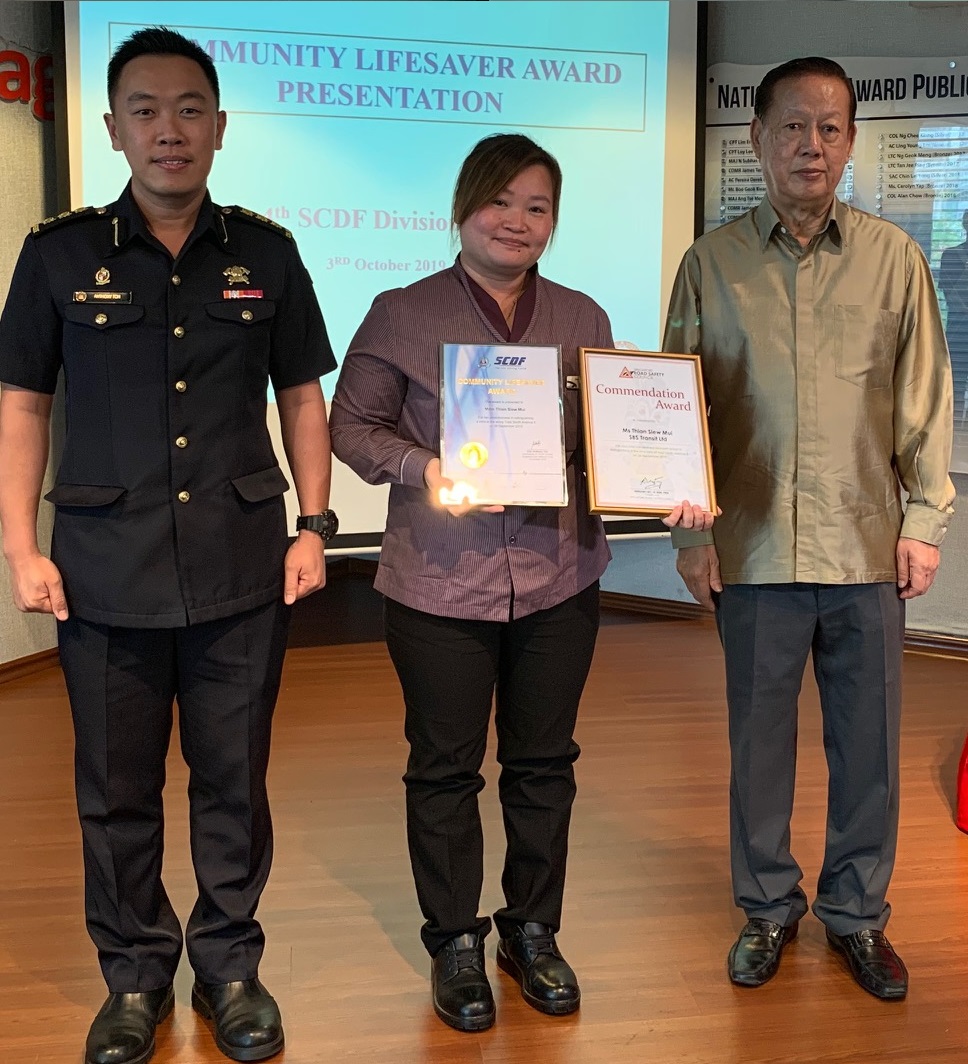 Singapore Civil Defence Force’s Awards
Bus Captain Mohd Azim was awarded with the Community Life Saver Award in 2021 for rushing out of his bus to extinguish the flames from a motorcycle on fire.
In 2019, two staff were presented with the Community Life Saver Awards for their swift actions in assisting passengers. Senior Assistant Station Manager Mohamed Ferdaus saved a boy who was hanging off the side of a moving escalator, whilst Bus Captain Thian Siew Mui had dashed out of her bus to put out a fire on a lorry.

In 2018, Station Manager Simon Fong and Assistant Station Manager Abdul Azim were presented with the Community Life Saver Award for saving the life of a commuter who had passed out at a station’s platform and had no pulse. They performed cardiopulmonary resuscitation and used an automated external defibrillator to get his heart beating until the paramedics arrived.
Bus Captain Jiang Hong received the Public Spiritedness Award when he used the fire extinguisher on his bus to help put out the flames from a burning car in 2016.

Bus Captain Thian Siew Mui also received a Commendation Award for her civic mindedness and swift action in extinguishing a fire on a lorry. 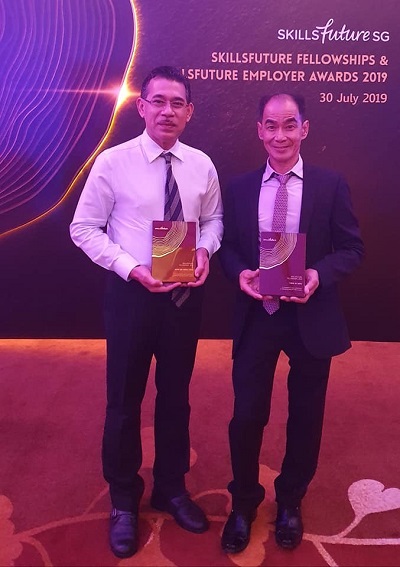